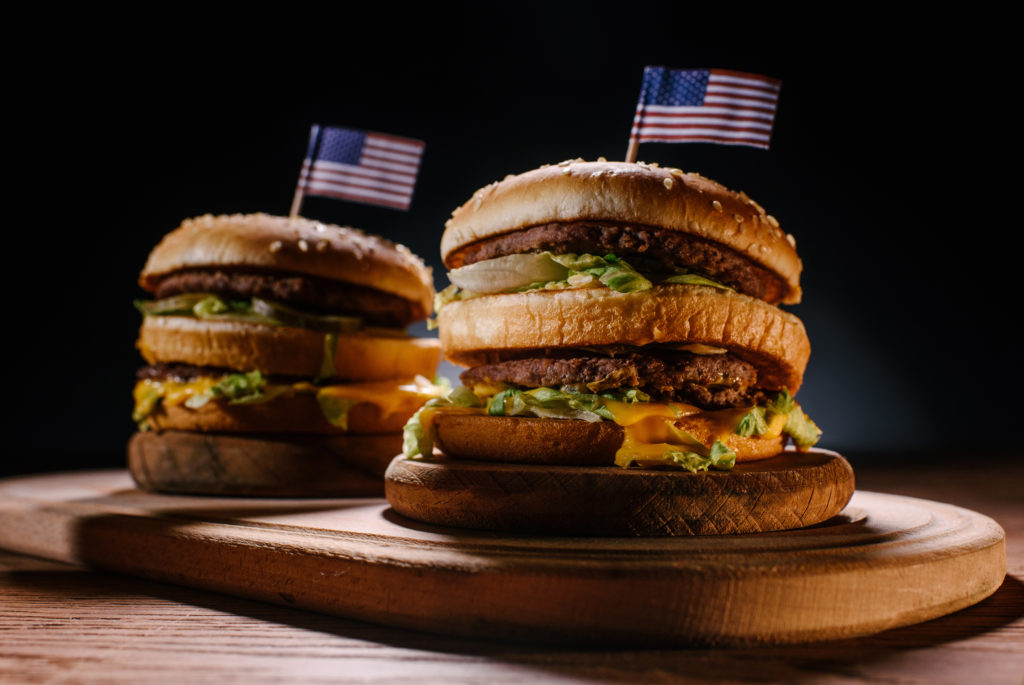 Here in the U.S. we certainly love our burger. Even with more attention being paid to healthier living, most of us will stay crave one every once in a while. We will always have a love affair with burgers.

Here is how it all started.

Unfortunately, there is no clear inventor of the hamburger. Depending on who you talk to, there are several contenders and different myths connected to America’s favorite sandwich. And the stories date back to ancient Egypt where they are said to have eaten ground meat and to Genghis Khan and his “Golden Horde” who ate raw meat patties of lamb or mutton when out on military campaigns. Then when Genghis Khan’s grandson Khubilai Khan invaded Moscow in 1238, the Russians adopted it into their cuisine calling it “Steak Tartare”. And from there it eventually came over to Europe.

Others prefer to start the story of the origins of the hamburger in Hamburg, Germany where they had a strong cattle industry and their own version of the steak called the “Hamburg Steak”.

When Germans began immigrating to the United States in the 18th and 19th Centuries.., food stands and restaurants began offering a steak cooked in the Hamburg style. The dish was simply shredded beef with regional spices and would be eaten cooked and raw. But how did it turn into a sandwich?

One particular myth states that the hamburger came to America at this time when European emigrants came here on ships run by the Hamburger Lines. On these ships the passengers were apparently served meat patties cooked on a grill and served on two pieces of bread.

Another story that has been passed down is that it was at the Delmonico’s Restaurant in New York in 1800s that the hamburger first showed up on an American menu. Another contender for the inventor of the hamburger is Charlie Nagreen of Seymour, Wisconsin who at the age of 15 sold hamburgers from his food stand at the Outagamie County Fair. The story says that he first started trying to sell meatballs, but people weren’t buying them and he thought it might be because it was difficult to eat while walking around so he flattened the meatballs and served them between bread. Seymour, Wisconsin claims to be the “Home of the Hamburger” and they hold a burger festival every year.

Another big contender is Frank and Charles Menches from Akron, Ohio. Their family claims that the two brothers invented the hamburger while traveling in a 100-man concession circuit to different evens in the Midwest in the 1880s. The story goes that while they were working the Erie County Fair in Hamburg, New York, they ran out of pork and so ground up beef and mixed it with spices and served it as a sandwich. They didn’t know what to call the sandwich so took inspiration from the town they were in and called it the hamburger.

Louis Lassen of New Haven, Connecticut is also said to have served the first burger in 1900 at his luncheonette called Louis’ Lunch Wagon. He is said to like to ground up scraps of beef and serve it between two pieces of toast to busy factory workers on the run. What started as a way to save money became a new popular sandwich.

The hamburger really grew in popularity though after the 1904 World’s Fair in St. Louis, Missouri after Fletcher Davis from Athens, Texas, began selling hamburgers from his stand at the fair. It was a sandwich he had been selling back home in Athens. He would grill raw hamburger steak until it was crispy on both sides and then place it between two pieces of toast with a piece on raw onion on top of the meat.

While the jury is still out on who developed the hamburger, Walter Anderson of Wichita, Kansas is said to be the first to develop buns to serve the hamburger patties on. He along with Edgar Waldo “Billy” Ingram founded the White Castle Hamburger in 1921 which is the oldest hamburger chain in America.

The great thing about burgers today is that it has evolved to meet the demands of the modern American customer. You can still get a traditional juicy beef burger, but today burgers are made out of different types of meat and some are meatless. And you can get a lot more variety in types of toppings and bread.

Here are some popular burgers today.

Named after the slang term for “nickel” which was the original price for a cheap burger during the war and depression eras, this burger is mixed with flour and soy meal and fried for a crunchy exterior and tender insides. The soy meals helped extend the meat longer during those tough times. You can still find these in choice spots in Northeastern Mississippi like the Slugburger Café.

If you crave butter all the time, then you will love the butter burger originated at Solly’s Grille in Wisconsin. Butter is soaked into the buns and onto the patties themselves.

If you ever find yourself in Salt Lake City, Utah, make sure you order a pastrami burger at one of the many Greek diners or restaurants around town. Burger innovators there have added thin sliced pastrami, cheese and Thousand Island dressing to perfect their burger.

This vegetarian alternative is a lot heathier than the meat burgers but just as tasty. The sweet potato and avocados give the burgers just the right amount of texture and taste to make your mouth water.

This is another meatless burger. The quinoa is really good for you but tasty too. You definitely won’t feel like you are missing out on anything.

Most restaurants have their own take on the American hamburger. From special sauces to different types of buns and toppings, they try to offer their customers something more than other burger restaurants.

Take for instance, Zac’s Burgers. For the last 33 years, they have prided themselves on delicious made-to-order meals including their signature burger with their unique wacky zacky sauce and friendly service at a reasonable price. Want to try a Zac’s Burger or learn more about why people choose burgers? Call or message them today.